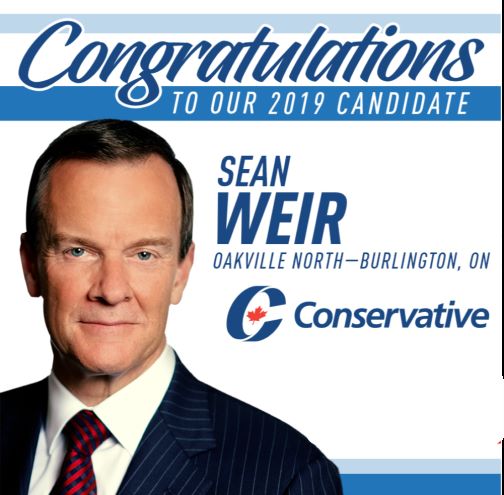 Canada’s Conservatives announced today that local community leader Sean Weir will be the party’s candidate in 2019 in the riding of Oakville North-Burlington. The nomination for the riding was opened on July 9.

Sean, along with his wife Cheryl, have spent the last 30 years in north Oakville where they raised their family. Sean has been twice elected as a town councillor in Oakville, helping eliminate inefficiencies and keeping taxes low, served on the Halton Healthcare Board, laying the early groundwork for the new hospital on Dundas Street, and spent five years as the Chair of the Oakville Hydro Board, investing in fibre optic networks that generated over $100 million for the town. Most recently he spent the last 18 years as the CEO of Canada’s largest national law firm.

“Sean Weir is exactly the type of candidate Canadians can expect to see from our Conservative Party in 2019,” said Andrew Scheer, Leader of Canada’s Conservatives. “He has impressive private sector experience, combined with a passion to serve the public, and a history of putting people before government. I welcome him to our growing team, and look forward to working with him in the months ahead.”

With the nomination of Weir, the Conservative Party now has over 120 candidates nominated for 2019. “I’m thrilled to be joining a Conservative team that has a positive vision for our country, ” said Weir. “We need a government that treats taxpayers fairly and with respect, and it’s become clearer every day that government will be a Conservative one in 2019.”

Tweets by @ONBconservative
DONATE HERE
Make A Contribution
VOLUNTEER with us!
Take Action In Your Community
Contact us
We Want To Hear From You